A Heritage Tour of Sutton-in-Ashfield 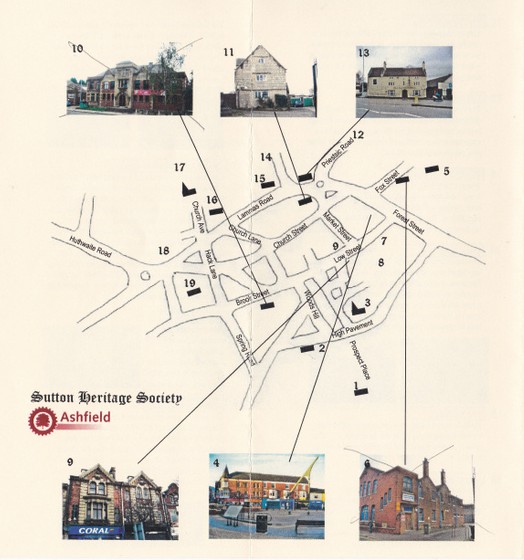 1. Lindley’s Mill
This tower windmill was built by James Lindley in 1820. It replaced a wooden post
mill which was situated in Mill Street. The old mill was being 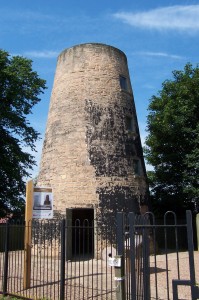 moved when it toppled over and was damaged beyond repair. Lindley’s Mill was derelict for over 100 years.
Although the workings are long gone, the stone tower (the only complete one in
Nottinghamshire) was restored in 2003. The aim of a joint venture between Ashfield District Council and Sutton Heritage Society it is now a museum and a heritage attraction,

2. Cowpasture Farm
One of the oldest ~ if not the oldest~ farms in Sutton. Now squeezed by neighbouring
developments, it once supplied the whole of Sutton town with farm produce. 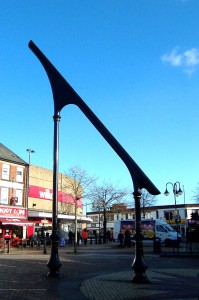 Situated in Portland Square, the sundial or gnomon, was unveiled on 29 April 1995. It
is said to be the largest sundial in Europe.

5. The Old Malt House
This stood behind the newsagents’ shop on Portland Square, to the left of the sundial as viewed here. It was one of Sutton’s oldest cotton mills. It was powered by water from the river Idle. It became known as the Malt House when it was used to produce malt for making beer. 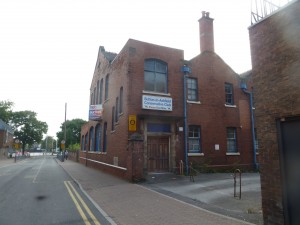 Opened in 1905 the building contained a smoking room, a reading room and billiards
room. Upstairs housed the Portland Assembly Room. Attached to the club was a fine bowling green. The club closed in 2010 and the building was demolished in 2014.

7. Crier’s Yard
This short, narrow cul-de-sac, situated off Low Street, was so called because the town crier lived there. The Town Crier’s Bell is still in use in Sutton library. 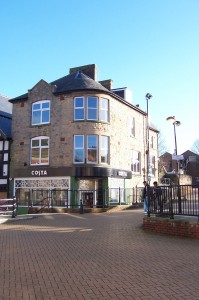 8. The Denman’s Head
This public house at the corner of Low Street was once called the King’s Head. Its
name was changed in 1820 because the landlord at the time was a great admirer of Lord Chief Justice Denman and his defence of Queen Caroline at her trial. 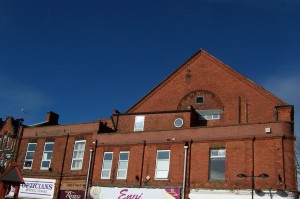 The Town Hall opened in June 1899, part of the money for the clock being raised by a gala on Sutton Lawn in 1891. The Market Street entrance was replaced by a shop and a hall in 1906 and a new entrance made from the Market Place. After a period of closure, it re-opened as the Rialto in 1932.

10. The Old Swimming Baths
Built in 1924 and opened in 1926. The architect was Leo Dodsley, the grandson of Squire Dodsley of Skegby Hall. It was funded by miners a 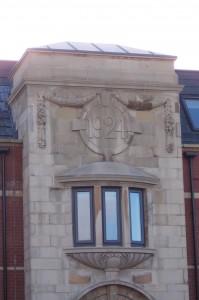 nd had slipper baths as well as a swimming pool. The pool could be covered by a solid maple floor to allow
dances, boxing and wrestling matches to take place. The building became redundant
when the new leisure complex was built on The Lammas in 2008.
In 2014 a block of residential apartments was built on the site. Part of the original
façade was included in the new building. 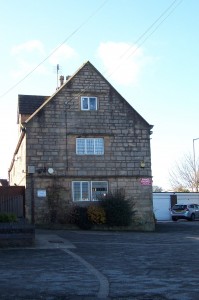 This building dates from around 1600 and was occupied by the Langford family. In the 18th century the house was used as an inn by packhorse men, some of which were
said to enter carrying jewellery – but they never emerged!

12. Priestsic Road
The element “sic” means a small stream. The first element could indicate that the stream passed through land owned by a priest, but the suggestion has been made that it is one of those Celtic survivals, the Welsh “pres”, which means brushwood.

13. The Old Blue Bell
This inn was probably built in the early 18th century. In 1817 the inquest on Bessie Shepherd, a seventeen year old girl murdered by Charles Rotherham, was held here. A memorial stone marks the site of this brutal murder on the edge of Thieves Wood.

14. Carsic Lane
The name is derived from the Viking word Kjarr meaning “brushwood in a marshy area” and the Anglo-Saxon word “sic” meaning a small stream. Until 1951 the lane was no more than a farm track. The old farm house still stands half way up the lane.
Near to the farm are the original rows of terraced ‘pit’ houses which were built for Sutton Colliery (pit) workers (Brierly Cottages).

15. The Pinfold
Pinfolds were used to impound stray animals, their owners having to pay a fine for their recovery. The present pinfold was moved from Devonshire Square in 1928.

16. The Lammas School
The school stands to the right of Church Avenue. 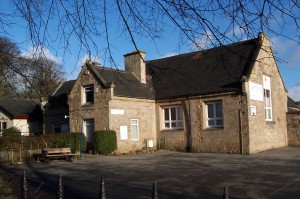 It was built by the National Society in 1846. The Duke of Portland gave the land, paid for its preparation and provided cheap stone. The National Society gave a grant of £300 and benevolent townsfolk
and the Duke paid for the rest.
The National Society had first supported a school in Sutton in 1818. It was housed in the Old Tithe Barn which stood where the present day Vicarage Housing Estate is, on the opposite side of Church Avenue. The school is now a private preparatory school called Lammas School.

17. The Church of St Mary Magdalene
The main part of the church building dates from the 12th and 13th centuries. The most notable outward feature of the church is its spire, built around 1391. It is 90feet high.
It is possible, on a clear day, to see Lincoln Cathedral (over 40 miles away) from the tower which is 45feet high. 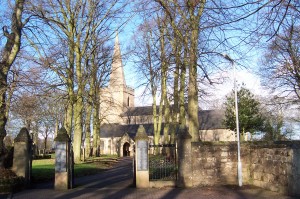 The earliest recorded churchwarden (1573) was Christopher Brandreth. A nineteenth century descendant, Jeremiah, had a rather different claim to fame. He was hanged
and beheaded at Derby in 1817 for high treason for his leadership of England’s last revolution. Another famous relative is Giles Brandreth, ex MP, broadcaster and author.

18. The Old Toll Bar
This stood near the present cemetery gates. Sutton had three toll bars, the others being on Stoneyford Road and Station Road.

19. St Mary’s Gardens
The gardens were constructed in a former quarry, Wright’s Hollow, which was filled in.
Sutton and its surrounding villages were once well known for their production of
limestone. Old quarry sites can be found all over the area. The best quality stone was used in buildings. Local examples are the church spire, the Manor House and, further afield, Hardwick Hall and the Houses of Parliament.